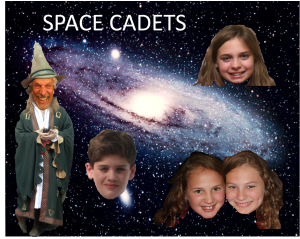 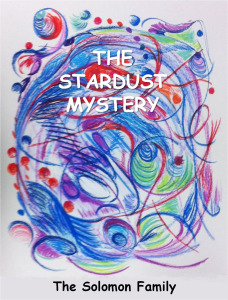 The story is about 4 kids (1 boy, Milo and 2 girl cousins, Lizzy and VC, plus Lizzy’s sister Neddy) that enter a contest whose grand prize is a trip around the moon.

One motivation is to win the trip for their grandfather who will be their coach.  He failed in his attempt to be an astronaut and the kids think he still has a dream to go into space.

They win the regional competition (invention for the future) with a virtual reality web site (introduced in chapter 2) called the Beamer, in which the kid’s avatars can visit a place at a time (present or past), and talk to historical figures.  For example, they visit Pisa in 1600 and talk to Galileo about his experiment.  Galileo responds using Siri-like technology based on the historical and scientific facts.

I was born in a place that is far, far away.

At a time long ago, but I am now here to stay.

George Washington’s body was once my home.

I am now part of you, but I could always roam.

Some call me Stardust because of my history

It will all be clear when you solve the mystery.

Who am I, and what is my story

Write me a rhyme to tell of my glory

So, you are made of STARDUST  that was once in the body of George Washington.  What is STARDUST?  Where did it come from? How did it get into GW’s body?  How did it get from GW’s body to yours.   These are the things The Space Cadets need to figure out. It is all based on scientific fact.  To solve the puzzle, they use the Beamer to visit: GW crossing the Delaware; Milo’s bloodstream (they can also change size)  where he is attacked by Killer T-cells; Lizzy’s dog’s hair where Lizzy is threatened by a flea; the big bang 13.8 billion years ago; the formation of earth 4.5 billion years ago; and first supernovae 9 billion years ago.  They also visit and talk to important scientists to solve the puzzle: Johannes Kepler, Albert Einstein, George Lemaitre (inventor of the Big Bang), Edwin Hubble (where Lizzy meets the flea again with bad consequences), and Henrietta Leavitt (whose work led to the discovery of the expanding universe and the big bang).  The kids compete against 6 other teams in the final.  To solve the puzzle, they learn a lot of science:  atoms,  cells in the body, the universe, nuclear fusion, the big bang and the formation of atoms.